RPSC SI Admit Card 2018: Rajasthan Public Service Commission (RPSC) has advertised the Sub-inspector and Platoon Commander jobs in April month and accepted applications from 24th April to 25th May from interested aspirants seeking to get police jobs in the state of Rajasthan. Many of the hopefuls seeking to get SI jobs in Rajasthan have applied for the announced posts. The RPSC is going to organize the written test on October 7th for the applied aspirants. To appear for the test, candidates have to initially get ready by downloading the hall ticket/admit cards. Candidates will not be permitted to appear for the written test if they do not show the admit card. Hence it is a mandatory document to proceed with the written test, all the aspirants are advised to download RPSC SI hall ticket 2018 before going to attempt the examination. Candidates can download RPSC SI Platoon admit card from the official portal, rpsc.rajasthan.gov.in. Check more details of RPSC SI Hall ticket 2018 from the following. 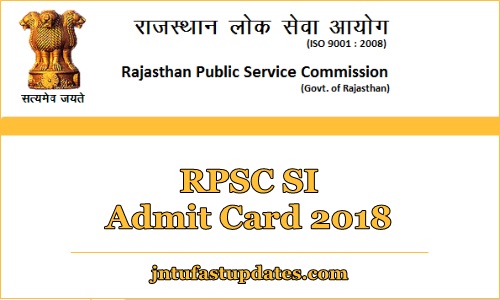 Rajasthan Public Service Commission is the government organization that works for various government aids. It recruits the suitable candidates into various government posts. Many of the government organizations associated with RPSC to hire the suitable employees. The RPSC announces various job notifications annually. The RPSC has now come up with (330 +10) 340 Sub Inspector & Platoon Commander Posts. Interested and eligible candidates can apply for RPSC SI and Commander posts from 25th April to 24th May. Applicants will be screened through various tests such as written test, medical examination, eyesight test and other tests. Hence aspirants who have applied during the announced dates will have to appear for the RPSC SI written test in scheduled date. Before going to appear for the test, candidates have to download RPSC SI Admit card 2018. The admit card will be accessible to download before 10 days of the examination (approximately). Candidates can get their admit cards from the official website, rpsc.rajasthan.gov.in.

All the competitors going to attend the RPSC Police SI examination in December must carry the admit cards without fail. Also, candidates need to carry any valid identity proof Xerox copy along with hall ticket. The examiners are going to check the hall ticket and id card of the candidate.