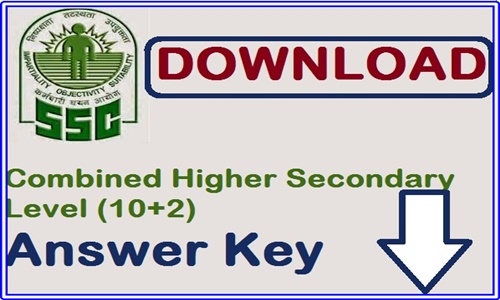 SSC CHSL 2018 Tier 1 Answer Key : Staff Selection Commission (SSC) annually issues various jobs for aspirants seeking Government jobs. The SSC has issued the SSC CHSL (Combined Higher Secondary Level) Posts. The vacancies include Lower Divisional Clerk/ Junior Secretariat Assistant, Postal Assistant/ Sorting Assistant and Data Entry Operator. Tentative vacancies for the posts of LDC/ JSA, Postal Assistant/ Sorting Assistant and DEO are 898, 2359, 2 and Data Entry Operator Grade” A”- Nil. Overall the SSC has announced 3,259 vacancies 2017-18. Many of the aspirants interested in SSC jobs have applied till the last date 18th December 2017. Lakhs of aspirants have applied for the CHSL posts this year. The SSC has scheduled the tier 1 examination from 4th March to 26th March. Candidates appeared for the examination can check the answer keys soon after 3-4 days of the examination. The official answer key will be released on SSC Official website, ssc.nic.in.

The SSC CHSL exam was conducted through online. The examination has been conducted across all over India. Candidates who have applied and appeared for SSC CHSL 2018 exam and waiting for the answer sheet can get it within two days after the exam. These answer sheets can work as the reference and it helps in analyzing your performance. It gives you a clear idea about whether you can qualify for the exam or not. In this huge competition, you will have the very difficult situation to qualify for the exam if your performance in the exam is not that good. You can also see the pattern of the marking scheme to calculate the estimated score. So, go through it to calculate your score in the exam.

The exam paper of each set consists of four sections such as General Intelligence, English Language, Quantitative Aptitude and General Awareness. Each section contains 50 questions and each question will be given one mark for the correct answering so, for every section there will be totally 50 marks. Totally the exam is conducted for 200 marks. But, for every wrong answer, you will be deducted 0.25 marks. So, based on this pattern and comparing your answers with the answers given in the SSC CHSL Tier 1 answer sheet 2018 you will get the final estimated score in the exam. So, do it like that and get the estimated score. To download the answer key, you can follow the below-given procedure.

The Commission had conducted Combined Higher Secondary Level Examination (Tier I), 2017 from 04.03.2018 to 28.03.2018 in the Computer Based Mode. The tentative Answer Keys for the said Examination have been uploaded on the website of the Commission i.e. www.ssc.nic.in. The candidates may login using their Roll Number, Password and Date of Examination and submit representations, if any, from 20.04.2018 (6.00 P.M.) to 23.04.2018 (6.00 P.M.) through on-line method only, on payment of Rs.100/- per answer. The candidates may take print-out of their respective Response Sheets as the same will not be available after the above specified time limit.

For further details such as SSC CHSL results 2018 and other information of the exam, the candidates can stay tuned to the official website and know the details that you want.