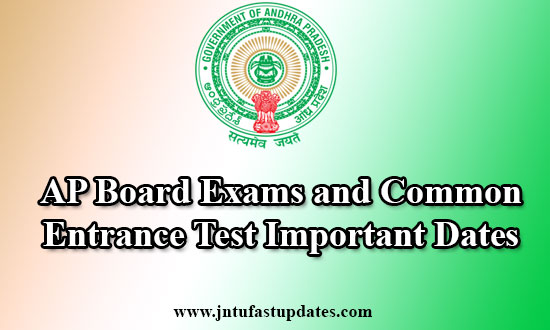 10th Class Exams (SSC) 2017 : Directorate of Government Examinations is an independent department functioning under ministry of secondary education, Government of Andhra Pradesh. The department is responsible for conducting the SSC/OSSC Public Examinations and a number of minor examinations.

Intermediate Exams 2017 : The Board of Intermediate Education promotes the vision of world-class education in Andhra Pradesh through quality leadership, support, and services. It aims at continuous improvement of education in the State. 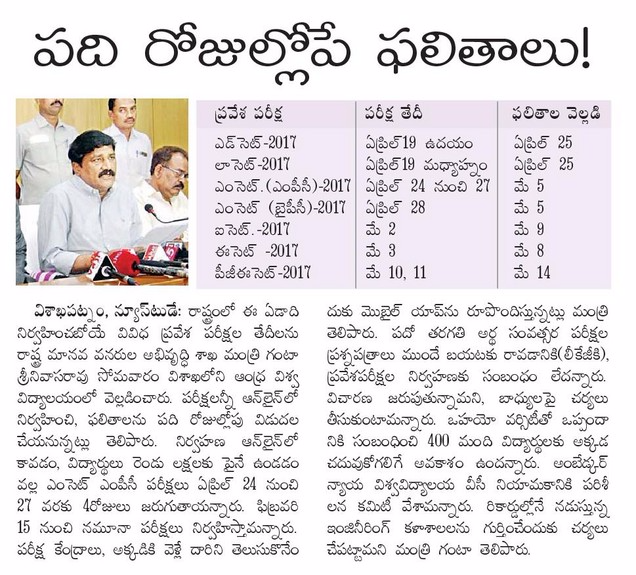 AP EMCET 2017 Exam : Engineering, Agriculture and Medical Common Entrance Test (EAMCET) is conducted by Jawaharlal Nehru Technological University Kakinada on behalf of APSCHE. This examination is the prerequisite for admission into various professional courses offered in University/ Private Colleges in the state of Andhra Pradesh.

AP EMCET Exam 2017 will be organized from 25th April to 28th April 2017 and it will be conducted by JNTU Kakinada. JNTUK will release the AP EAMCET 2017 notification for admissions into Private and government colleges for various Engineering, Medicine and Agriculture courses.

AP ECET Exam 2017 will be organized in the month of May and it will be conducted by JNTU Anathapur. This ECET is conducted to take admissions into higher education for Diploma and B Sc students. ECET notification, application process, exam and results will be available in official website.

AP ICET Exam 2017 will be organized on 2nd May, 2017 and it will be organized by AU Vishakapatnam. Andhra University will conduct the ICET exam this year on behalf of APSCHE. ICET notification will be available at official website.

AP Ed.CET 2017 Exam :  AP EdCET Exam 2017 will be organized on 20th May, 2017 and it will be conducted by Sri Venkateswara University, Tirupathi. Ed.CET notification, Exam details, results will be available at official website. SVU will be responsible for AP Ed.CET exam notification, exam, answer key and result.

AP PGECET 2017 Exam : AP PGECET Exam 2017 will be organized in month of May and it will be conducted by JNTU Kakinada. PGECET is common entrance exam to get admission into universities for PG courses like M.Tech, M. Pharmacy, M. Arch and ME. JNTUK will release the PGECET notification 2017, Exam, Admit Card and Result.

AP LAWCET 2017 Exam : AP LAWCET Exam 2017 will be organized on 20th April, 2017 and it will be conducted by Sri Krishnadevaraya University. SKU will release the AP LAWCET 2017 notification, Application Form, Admit Cards and Results. And it is also responsible for counseling.