Minister of Human Resources Development of Andhra Pradesh, Ganta Srinivasa Rao has stepped into his new office that was built in the temporary secretariat in Velagapudi, Amaravathi.  While addressing the media in his new office he said that by next academic year, all the educational institutions and its associated offices will be completely shifted to the new capital Amaravati and will start working from there.  He said that already many of the educational institutes have been shifted to the capital city. 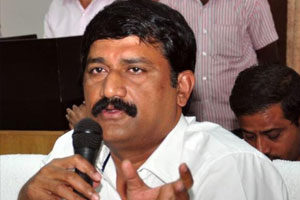 He said that the allegations that came on the head of SRM University in Tamil Nadu will be investigated soon and will decide whether or not to allot place for the university in Amaravathi.  He also said that from next year along with EAMCET all other entrance exams will be conducted online.

Many top most universities to come to the new capital Amaravathi

He said that it was his gratification that under his ruling as Minister of Human Resources Development, all the educational institutions were coming to the capital.  He said that the entrances were allowed in five institutions and that this year they will start entrances into all the central and tribal universities.

Education cities are soon going to be inaugurated in Visaka, Amaravathi and Tripathi cities.  He said that the bill for private educational institutions was brought into action.  He also said that top most universities like VIT, Mata Amrutanandamayi, and Indo American Institute will be coming to Amaravathi.

He said that there were talks about awarding marks to the students who show merit in physical literacy and games.  Just as Hyderabad has become IT hub, the new capital Amaravathi seems to become an educational hub soon.  Hope the new educational hub produces many young talents.