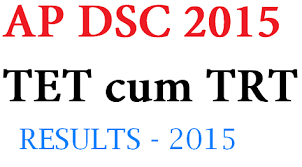 AP DSC results 2015: The DSC results 2015 of AP are finally going to be release on June 1. However, the TET results became some problem in AP. Some of the members consulted the court to grant permission for them to take on the TET exam. The court had ordered the education board to stop the allotments up to June 3. Later the education board consulted the court and explained that, the allotment and results procedure are two different things which can’t shows any effect on one another. So, we are ready to release the results on June 2. Finally the AP DSC results 2015 are going to release on June 2.

The AP DSC results 2015 are going to announce on June 1. The notification is released on 21 Nov 2014 and the written test was conducted on 9, 10, 11 May 2015. The government after conducting the examinations released the initial key on 18 May 2015. If there are any objections in the key, the candidate may bring them in to the notice of AP DSC with in a week. Later, after all the considerations the final key was released with some modifications in the key and awarded marks for some wrong answers in the respective sets. The final key is available for the download from May 29 onwards. The AP DSC results 2015 will be release on June 2 2015. After the results the posting will be on 11 May or 12 May at Tirupati in the presence of Honorable Cheif Minister N. Chandra babu Naidu.

The AP DSC results 2015 will be Released.

It is very easy to get TET results 2015. Please follow the simple steps given below to get ap dsc tet results.