AP ICET 2017 Normalization Procedure – How To Calculate Normalized Marks of the Candidate: Candidates are aware that the AP ICET-2017 is being conducted on 02-05-2017 in two sessions. 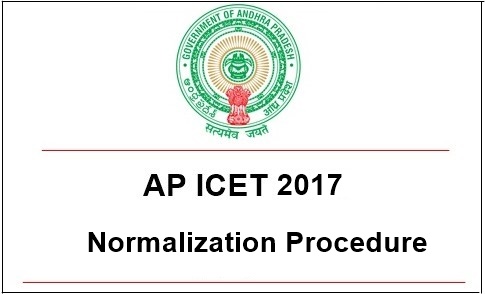 APICET-2017 is being conducted in two sessions based on the same syllabus, same pattern for candidates having same eligibility criteria. A candidate will be eligible to appear only in one session. Since the question paper will be different for each session, there is a possibility that the candidates compare themselves about the variation in the difficulty level of questions. However, it may be noted that utmost care will be taken so that all the papers are of same standard. Further, it is decided to adopt a normalization process to eliminate any such variations in the difficulty level of various sessions.

Normalization, as used in Indian context, is a process for ensuring the students neither advantaged nor disadvantaged by the difficulty of examinations conducted in multiple sessions. This process is based on a simple formula which has been adopted as recommended by the experts from reputed educational institutions at all India level and Universities. The process is being implemented in other all India / Nationwide entrance tests for admission into undergraduate and graduate professional courses. Normalisation process ranks all the candidates across all sessions on a comparative scale. In any normalization process, the marks of the easier session may be reduced marginally and the marks of the harder paper may increase marginally on the global level, depending on the average performance in each session. If there is no much difference in the averages between two sessions then there won’t be much difference in the normalized marks as well. Normalizing marks would justify the candidates while protecting their actual performance.

SMS: (Average + Standard Deviation) of the session in which the candidate belongs to

GMS: (Average + Standard Deviation) of all the candidates across all sessions together

TopAverageSession: Average marks of the top 0.1% of the candidates in the session in which the candidate belongs to

TopAverageGlobal: Average marks of the top 0.1% of all the candidates across all sessions together

Weightage for assigning merit ranks: 75% of EAMCET normalized marks and 25% of Intermediate Marks in group subjects to prepare the rank.

Note: For the candidates for whom there is no qualifying cut off in APICET-2017, if the marks in APICET-2017 after normalization go below zero (negative), the total marks are treated as zero and the ranks are assigned based on those marks. If tie persists, then APICET-2017 normalization marks will be considered for breaking the tie.

Demonstration with a sample data:

Averages and Standard Deviations in a particular session and averages of top 0.1% candidates of a particular session, Global Average and Standard Deviations of all sessions together, Averages of top 0.1% candidates in all sessions is given in Table 1. Example data of normalized marks is shown in Table 2 to Table 4.