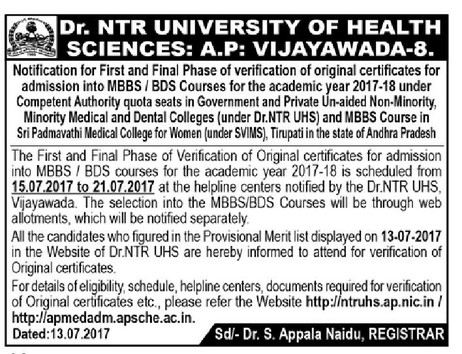 Dr. NTR UHS hereby notify that the first and final verification of certificates for Web Based Counseling will be conducted for Admissions into MBBS/BDS Courses. The candidates those who have appeared and secured cut off ranks in NEET(UG)-2017 and figured in the provisional merit list of candidates displayed on 13.07.2017 in the website of Dr. NTR UHS are informed to attend for verification of original certificates for the academic year 2017-18 into the Government, Statewide Colleges, Un-aided Non-Minority, Minority, Private Medical and Dental Colleges under Dr. NTR UHS and MBBS Course in Sri Padmavathi Medical College for Women (under SVIMS), Tirupati at any one of the following Help line Centers of their choice as per the schedule given below.

The Telangana Candidates those who are seeking admission in un-reserved (15%) and State wide quota seats have to attend to help line centers 5 and 6 (JNTU, Hyderabad and PGRR Distance Education Center Hyderabad.) only as concerned officials of all the welfare departments of Telangana State will be available at both the Hyderabad centers.

Note: The following special categories verification is at Dr. NTR UHS, Vijayawada center only in addition to General verification. The candidates who have applied under NCC and Sports & Games are directed to attend on the specified time and dates for both General and Special category certificates verification. 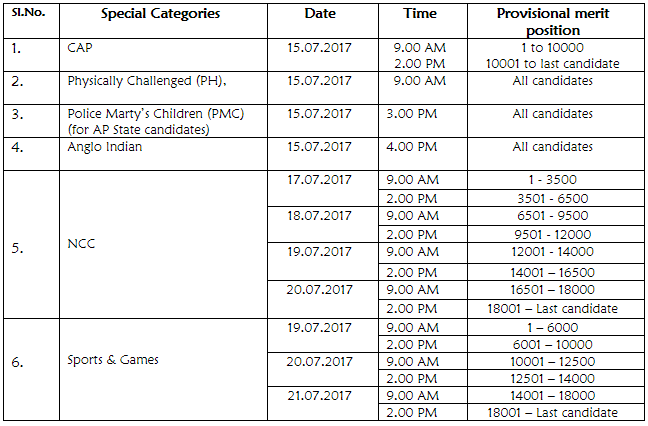 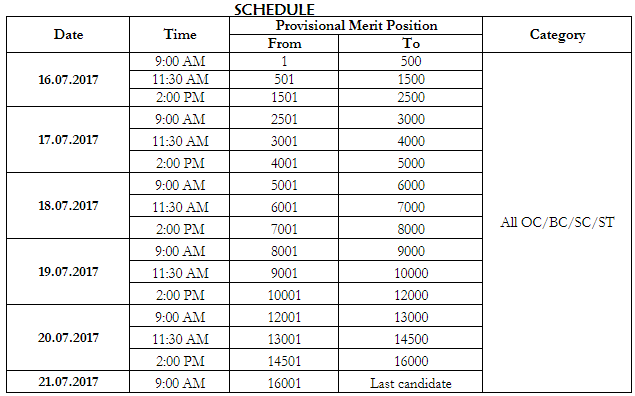 The selections into MBBS/BDS will be through Web allotments which will be notified separately.

Eligibility for admission into MBBS/BDS courses:

1. The candidate should be an Indian National or Person of Indian Origin (PIO) / Overseas Citizens of India (OCI) Card Holder and should satisfy the Local or Non-local status in Andhra Pradesh (Residence requirement) as laid down in Andhra Pradesh Education Institutions (Regulations of Admissions) Order, 1974. Selection will be done as per the procedure laid down in the G.O.P.No.646, dated 10.07.1979 as amended in G.O.Ms.No.42, Higher Education (EC2) Department, dated 18.05.2009.

2. The candidate should have passed Intermediate (10+2 pattern) or its equivalent examination with Physics, Chemistry, Biology (Botany, Zoology) / Biotechnology and English.

3. The candidate should have qualified in NEET – 2017 and secure the following cut off score.

The orders issued by the Government from time to time with regard to admissions into MBBS/BDS courses will be applicable.

Certificates to be produced at the time of counseling: The candidates are directed to bring all the original certificates (mentioned below) and three sets of Xerox copies.

(c) SSC or equivalent examination containing the Date of Birth

(g) Candidates who have studied in the institutions outside of Andhra Pradesh have to submit 10 years (years of period to be specified) residence certificate of the candidate or either of the parent issued by MRO / Tahsildar.

(i) Minority certificates issued by the concerned Department.

(k) The candidates claiming fee exemption shall produce the latest Income certificate of the Parent issued by MRO / Tahsildar/Ration card.

(l) Undertaking  in the form of  Affidavit  on Rs. 100 /- Stamp paper  while the  Parent and candidate stating that the  caste  and area   mentioned  in the  certificates  are genuine and  they will be  held responsible  for any further consequences  as per LAW   if any discrepancy  noticed.

(n) Candidates claiming eligibility of reservation under Special categories i.e., CAP, NCC, Sports & Games, PH, PMC and Anglo Indian should furnish the  required certificate in support of their claim on the day of verification of original certificates for special categories as per schedule given.

(b) The tuition fee is to be paid as per the SVIMS norms in respect of candidates selected in SVIMS, Tirupati.