Bihar Forest Guard Result 2019 (Vanrakshak): Central Selection Board of Constable, Bihar conducted the Forest Guard examination on 16th June in many examination centers across the state. A large number of competitors have appeared for the examination in the state of Bihar. All the competitors are hereby informed to download Bihar Forest Guard answer key 2019 by visiting the CSBC official website, csbc.bih.nic.in. CSBC released the answer key for forest guard written test for all the sets (A, B, C, D) given in the examination. Candidates can tally their answers with the corresponding set to estimate the score and to analyze their attempt. The CSBC will soon make the announcement regarding the Bihar forest guard result 2019 soon on its official portal. Candidates can check the result as soon as the organization announced it. Along with the result, the CSBC Bihar will announce the cutoff marks and merit list of forest guard examination. 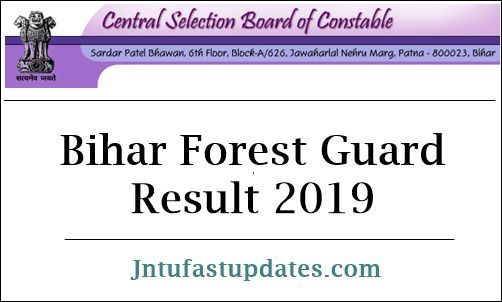 Central Selection Board of Constable, Bihar is the police department that works for the safety and security of the state. The department annually releases various recruitment notifications every year to hire suitable aspirants into various posts. This year the CSBC Bihar released the notification for 902 Forest Guard vacancies. Many of the aspirants having the suitable educational qualification and profile have applied from 1st January to 31st January 2019. CSBC received lakhs of applications from interested aspirants. The selection of suitable aspirants will be based on physical standards test, physical eligibility test, screening test, and interview rounds. Aspirants who qualify all the rounds with good merit will be finally taken into consideration for forest guard vacancies in Bihar.

All the competitors who have appeared for the CSBC Forest Guard examination can expect the result soon. The result is going to be announced in 3 to 4 weeks after the examination [tentatively]. Central Selection Board of Constable, Bihar is going to release the result in 2nd week of July, approximately. Candidates competed for the Forest Guard posts can check the official website on a frequent basis to download the result.

The Central Selection Board of Constable, Bihar is going to announce the cutoff marks for the conducted examination at the time of announcement of result. The cutoff marks will be based on various factors such as the number of posts, the number of candidates competed for the examination, and other details. Bihar Forest Guard cutoff marks 2019 category-wise, section-wise will be released. Competitors have to score the required qualifying marks as mentioned to clear the written test round and to get shortlisted for next rounds. Bihar CBSE will release the Forest Guard merit list 2019 with the names of qualified candidates.

Results: Candidates selected for PET of Forest Guard after the Written Examination. (Advt. No. 01/2019)