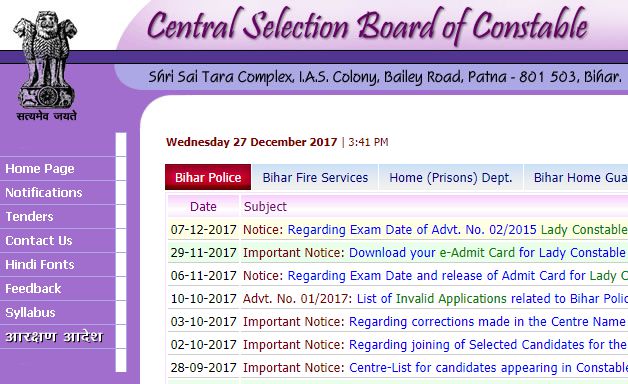 Central Selection Board of Constable (CSBC) is the Bihar state Police Constable selection board, which issues various recruitment notifications annually for the constable and other posts. This year the CSBC has announced 700 Driver Constable and 969 Fireman Constable posts. A huge number of posts have been advertised by CSBC. Approximately, 5 lakhs above aspirants have applied for the announced posts. While the suitable candidates will be shortlisted through written test and physical eligibility test (PET), and interview/document verification rounds. All the hopefuls applied for the CSBC Police Constable Driver, Fireman Driver Posts have appeared for the written test round on 10th June. Hopefuls attended the Bihar Police Constable [Driver/Fireman] examination on 10th June can check the results soon on CSBC Official portal. The Bihar Police Constable Results 2018 is expected to release after 3 to 4 weeks after the examination. Candidates can expect the results in 2nd week of July (Tentatively). The exact result date will be soon announced by the organization.

The Bihar Police Department will announce the results, cutoff marks, and merit list at a time. Probable, the CSBC is expected to release Bihar Police Constable Result in the month of July (Tentatively). The competitors can check the driver, fireman posts can check the cutoff marks from the official website, csbc.bih.in. The Bihar Police Department will release the Category-wise cutoff marks ie, for General, BC, SC, ST and overall cutoff marks. Candidates scoring fulfilling marks in the examination will be declared as qualified the written test round. The cutoff marks/qualifying marks will be decided based on various factors such as the level of competition, number of available posts, difficulty level of the question paper and various other factors. The organization will announce the Bihar Police Constable Driver Cutoff Marks/qualifying marks soon. Probably, the cutoff marks will be released along with the result. Candidates can stay checking the CSBC official portal for latest updates.

CSBC announced the Bihar Police Constable Result, cutoff marks, merit list on its official portal, csbc.bih.nic.in. as per the announcement, the CSBC Bihar Constable result will be announced after 3-4 weeks after the examination. That is the Bihar Police department is to release the results in 3rd week of August.

Advt No: 01/2018 DRIVER CONSTABLE AND DRIVER FIREMAN List of Candidates Successful in written Examination and called for PET Selection List to be pasted below.click below link