Bihar Police Driver Admit Card 2020: Central Selection Board of Constable Bihar has recently rolled out a recruitment notification for 1722 constable driver posts. To screen the suitable candidates for the announced posts Bihar CSBC is going to conduct the written test round for the applicants. The written test round will be organized across Bihar in almost all the districts. Aspirants applied for CSBC Bihar Driver Constable posts must get ready for the examination as the competition is going to be tough for driver constable posts in Bihar. Contenders have to download Bihar Police Driver Constable admit card 2020 to proceed with the test. Without showing the admit card, contenders will not be allowed to participate in the examination. Also, the admit card is the document that provides all the information such as exam center name, date, exam timings, reporting time, and also the candidate’s information. Soon after downloading the admit card, aspirants can check all the details. Applicants who had applied for Bihar Police Driver posts 2020 can soon download the hall tickets from CSBC Bihar official website, csbc.bih.nic.in. Applicants will be informed about the hall ticket availability date and exam dates’ information shortly. Applicants can keep visiting the CSBC Bihar official website to check the updates.

Central Selection Board of Constable Bihar is the state government organization that monitors the constable recruitment process in the state. This organization releases various notifications to select the candidates for the police department. Recently, CSBC Bihar announced a recruitment notification for 1722 Constable Driver posts. During the application dates, a large number of aspirants seeking to get state government jobs in Bihar have applied for the announced posts. The organization received lakhs of applications from aspirants who are desirous to work for the police department. CSBC Bihar is going to conduct the written test round, physical eligibility test, medical test, and document verification rounds to select the candidates for driver constable jobs. Candidates qualifying the selection process with good merit will be shortlisted for the announced posts. 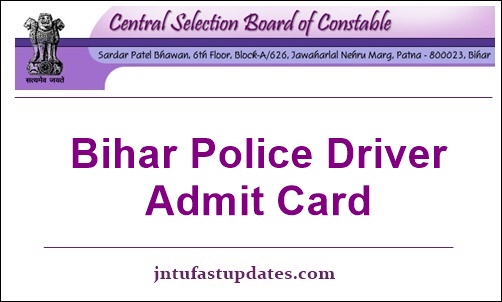 Aspirants need to score 30% of marks in the written test round to clear the exam.