FCI Phase 2 Result 2019, Merit List: Food Corporation of India (FCI) Phase II written test for various posts has been conducted on 27th July. The FCI examined many places across the nation. Candidates who cleared the Phase I examination have appeared for the Phase II examination as per the schedule. The FCI released the answer key for the Phase 2 examination soon after the examination completed.

Aspirants competed for the Phase II examination can download and check the answer key from the official website, fci.gov.in. The answer key is available for all sets A, B, C, and D. Competitors can compare the answers with the relevant answer key among the given sets. Candidates can shortly expect the result from the FCI. Keep checking the FCI portal to download the results. FCI JE, Stenographer, Typist, and AG result is going to be released at a time. The organization will leave an update regarding the result shortly. Aspirants waiting for the FCI Phase II result can keep checking the official website. 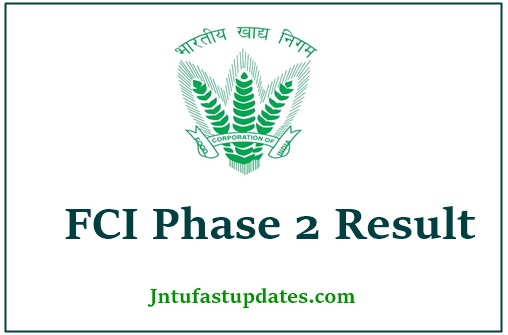 As per the updates from the FCI, the result is going to be released soon in November last month or December first week [tentatively]. Hence the competitors who had appeared for the Phase II examination on 27th July can get ready for the result. The update regarding the result will be left shortly by the organization. Competitors can check the FCI Page frequently to check the update.

The FCI is going to announce the phase 2 merit list along with the result. The merit list specifies the names of all qualified candidates. The Merit List will be released in PDF format. After downloading the merit list aspirants can check their names in it.

What after the FCI Phase II Examination

Candidates qualifying the Phase-II Examination, the aspirants have to go through the following rounds.

Candidates qualifying all the rounds will be shortlisted for the announced posts.