All the candidates must fulfil each and every one of the following five criteria to appear in JEE (Advanced) 2018.

The percentages of various categories of candidates to be shortlisted are: 27% for OBC-NCL, 15% for SC, 7.5% for ST and the remaining 50.5% is OPEN for all. Within each of these four categories, 5% horizontal reservation is available for PwD candidates.

The following table show the order to be followed while choosing top 2,24,000* candidates in various categories based on the performance in Paper-1 of JEE (Main) 2018. 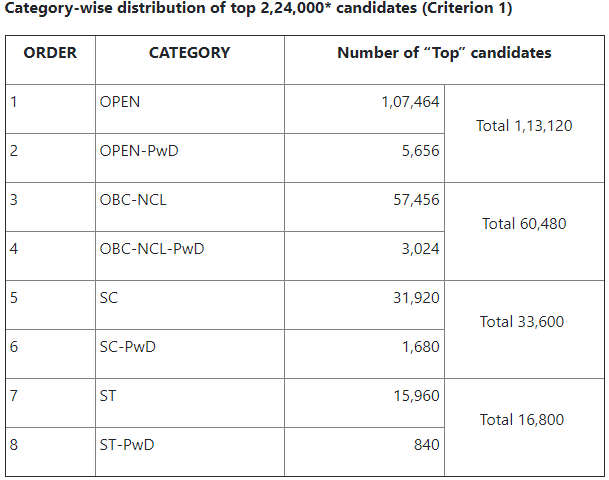 * The total number of candidates can be slightly greater than 2,24,000 in the presence of “tied” ranks/scores in any category.

Criterion 3 – Number of attempts: A candidate can attempt JEE (Advanced) a maximum of two times in consecutive years.

Criterion 5 – Earlier admission at IITs: A candidate should NOT have been admitted in an IIT irrespective of whether or not he/she continued in the program OR accepted an IIT seat by reporting at a reporting centre in the past. Candidates whose admission at IITs was cancelled after joining any IIT are also NOTeligible to appear in JEE (Advanced) 2018.

Candidates who have been admitted to a preparatory course in any of the IITs for the first time in 2017 can appear in JEE (Advanced) 2018.

However, in any of the above cases, the candidate is required to fulfil the conditions mentioned from criterion 1 to criterion 4.

PERFORMANCE CRITERIA IN CLASS XII (OR EQUIVALENT) BOARD EXAMINATION FOR ADMISSION
Regarding the cut-off marks for the top 20 percentile
Regarding the aggregate marks of 75% (or 65% for SC, ST and PwD)