The organization has made accessible of KSP Armed police constable answer key 2020 for all sets A, B, C, D. Aspirants competed for the test can download the corresponding set they have appeared and can compare the score by tallying the right and wrong answers with it. Aspirants can analyze the score, marks, chances of getting qualified in the examination, and can understand their attempt. Competitors can wait for a few more days to download KSP Armed Police Constable result. Soon, the organization will announce the result date on its official website. Aspirants can keep following the portal for more updates. 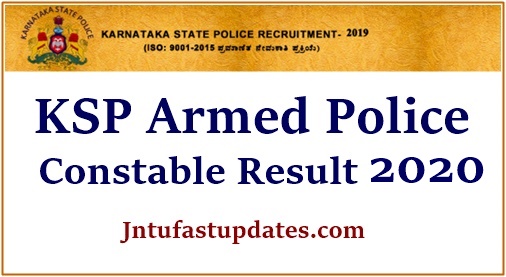 Karnataka State Police (KSP) is the Police Department of the state that monitors the safety and security of the people. The department releases various notifications every year to recruit suitable candidates into police department posts. KSP has recently released a recruitment notification for 1449 armed police constable (men) posts. The organization accepted applications from june. A huge number of hopefuls wishing to become the police and save the nation have applied for KSP Armed Police Constable posts during the application dates. Candidates will be selected through various rounds, Written Test Round, Physical Endurance Test, Physical Measurements Test, and Document Verification (DV)/Interview Round. Candidates clearing all the tests will be finally placed in armed police constable posts in Karnataka state.

KSP is going to declare KSP Armed Police Constable written test result within 3 to 4 weeks after the examination. Most probably, the result is anticipated to release in November/December [tentatively]. Soon, the KSP will announce the Police Constable Result release date on its website, ksp.gov.in. Aspirants competed for the test can keep visiting the portal frequently to check the result date. Candidates can check their score, rank obtained in the written test round soon after the result has been declared.

KSP is going to release the cutoff marks and merit list for the KSP Armed Police Constable written test round. Aspirants can check the cutoff marks category-wise [for general, BC, ST, SC, and other categories], which will be unveiled by the organization. The organization calculates cutoff marks by considering various factors such as the number of posts, the level of competition, Candidates qualified the written test round, and various other aspects. Soon, the KSP will release Karnataka armed police constable qualifying marks category-wise on its official portal, ksp.gov.in.