PSEB 12th Rechecking Result 2019: Pubjab Board 12th Revaluation/Rechecking result 2019 announced at pseb.ac.in. Punjab School Education Board (PSEB) conducted the class 12th examinations in from 1st March to 29th March as per the scheduled time table and released the result on 11th May. All the aspirants who have appeared for the PSEB 12th examinations have checked their results in the month of May. While the PSEB accepted applications for class 12th revaluation/rechecking/retotaling after declaring the results. Candidates who felt they got fewer marks in the exam have applied for the recounting/revaluation in the specified dates. Candidates waiting for Punjab 12th revaluation result can check the official portal, pseb.ac.in to check the result. The board is expected to release the revaluation/recounting result soon in this month. PSEB 12th recounting/retotaling result 2019 Arts, Medical, Non-Medical (Science), Commerce streams will be released by the board. Candidates applied for revaluation can check the result as soon as the result declared. Stay checking the official page to check the result. 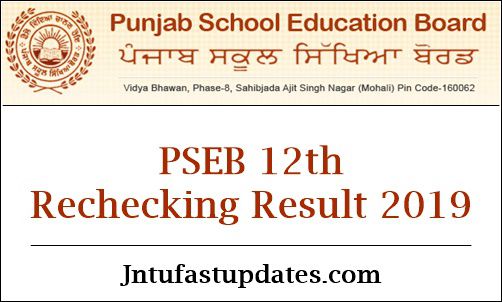 Punjab School Education Board (PSEB) is the Punjab state education board that was established in the year 1969. PSEB headquarters was situated in SAS Nagar. The PSEB offers secondary and higher secondary education for students in the state of Punjab. The PSEB is increasing the education rate year by year in the state. Many of the students are gaining education from the Punjab BSE every year. The PSEB Board is going to organize the examinations in the month of March and releases the results in the month of May every year.

All the students applied for Punjab 12th revaluation/recounting can check the details in the month of July [tentatively]. The result date will be announced shortly on the PSEB Official website, pseb.ac.in. After the declaration of PSEB Class 12th result, candidates can check the marks, and grade obtained by them. Students can also check whether there is an increase in their marks or not. Candidates can check PSEB 12th rechecking result for science, arts, and maths streams. the recounting result declared by PSEB.