RRB ALP Stage 2 Answer Key 2019: Railway Recruitment Board (RRB) conducted the Assistant Loco Pilot stage 2 (CBT 2) written test on 21st, 22nd, and 23rd January 2019 respectively. Many of the hopefuls who have qualified in the stage 1 examination have competed for the Computer Based Test 2. The examination held in many places across India. RRB conducted the CBT 2 in regional Railway Recruitment Board associated places. Hopefuls who have competed for the CBT 2 can check the answer keys from the RRB regional websites. Candidates can also check RRB ALP CBT 2 answer key 2019 from the Indian Railways official website, indianrailways.gov.in. The answer key is the most useful document needed to compare and estimate the score. Aspirants can download RRB ALP CBT 2 OMR sheet, answer keys and can estimate the score by comparing the attempted answers with it. Candidates can get an idea about their attempt, the probable score, which is going to obtain in the examination and other details by downloading the answer keys. 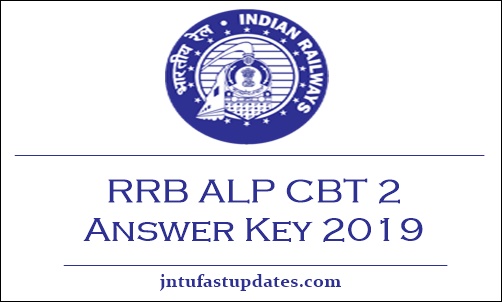 RRB has recently released the 26502 ALP/Non-Technical Grade III posts. A huge number of aspirants seeking for the Railway jobs have applied for the RRB Loco Pilot Technician Grade III vacancies. Totally Railway Recruitment Board (RRB) has nearly 21 boards which work with it for selection of eligible candidates into various RRB departments for various parts of India. RRB has recently conducted the 1st level examination for ALP and Technician posts. Lakhs of hopefuls seeking to get railway jobs have competed for the stage 1 examination. And also RRB has unveiled the result on 13th January. RRB conducted the CBT Stage II examination in the month of January.

Candidates competed for the RRB ALP CBT can estimate the score by comparing with the answers. There will be a negative marking of 1/3 marks for each wrong answer. Candidates have to take this into consideration while evaluating the score.

The final Merit List takes into account 70% of Part A CBT 2 marks and 30% of the RRB ALP Computer Based Aptitude Test marks for Loco Pilot.