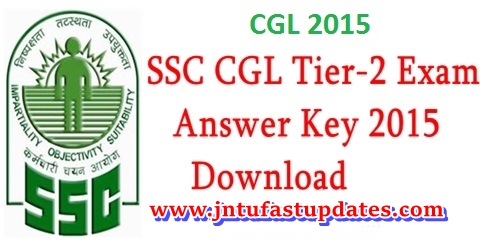 Staff Selection Commission conducted Combined Graduate Level Examination on 25th October and 26th October 2015. Here we provide SSC CGL 2015 answer key of Tier 2 for the candidates who are all appeared for the Tier II examination on October 25, 26th 2015. Aspirants can download the SSC CGL 2015 answer key for Tier II exam through Official Website Links Which are given Below.

SSC CGL Tier 2 October 2015 Exam will be Conducts in 3 papers. SSC CGL Tier 2 Paper 1 Will Be Conducts on October 25th Morning Shift and For Paper 2 Afternoon Shift. For Paper 3 on October 26th will be conducted in 3 shifts. SSC CGL TIER II exam 2015 Written test based in Hindi, English Papers on GEography, General Knowledge, Aptitude, Verbal Communication Skills. SSC CGL Tier 2 Exam 2015 will be Conducts in Many States across India. Candidates are waiting for their Answer Keys, and solved ques papers for evening and morning shift will be shortly available on website after the Exam. Exam will be held in Morning & Evening Session. SSC took exam on various sets so that there will be Transparency in exam. Answer Key will be Shortly available after the Exam.

Stay Tuned For the SSC CGL Tier 2 Results 2015 Released dates and Cut off marks, meri List For all BC,OC,SC,ST Students.