TS Gurukulam TGT PGT Answer Key For Paper 1, 2, 3 PDF Download 2018 : Telangana Tribal Welfare Residential Educational Institutions Society (TTWREIS), Gurukulam Telangana has done with the Trained Graduate Teacher (TGT) and Postgraduate Teacher (PGT) written tests. The TGT PGT Gurukulam exams conducted From September 28th. Aspirants who have come across the Telangana Gurukulam TGT PGT examinations can cross-check with the answers by downloading the official answer key from the website, treirb.telangana.gov.in. The answer keys for TGT and PGT exams will be shortly available on the portal mentioned here. Aspirants can get the answer key for all dates and all sets A, B, C, D. By downloading the answer key for the corresponding date and set, candidates can estimate their probable score. More details about the TS Gurukulam TGT PGT Answer sheet 2018 are mentioned in the following article. 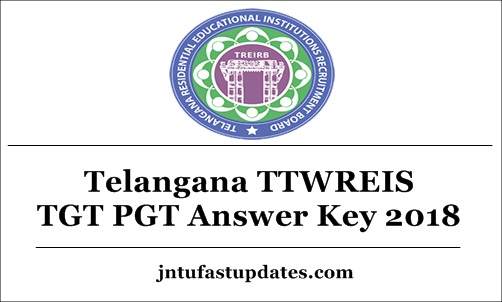 Telangana Tribal Welfare Residential Educational Institutions Society (TTWREIS), Gurukulam Telangana released the notification for 2932 Trained Graduate Teacher (TGT) and Postgraduate Teacher (PGT) posts. A massive number of interested and eligible aspirants have applied for the announced posts. The TTWREIS has organized the written test as per the scheduled dates. The examination was conducted in many examination centers across the Telangana state. Almost all the applicants have appeared for the examination as per the scheduled dates.

The TGT and PGT Paper I has been conducted for various subjects Mathematics on 11th October, English on 12th October, Social + Biology on 13th October, Telugu + Sanskrit on 22nd October, Physical Sciences on 23rd October, and Science on 24th October.

Aspirants appeared for the TGT, PGT Paper 1, Paper 2, and Paper 3 can soon check the answer keys and evaluate the score by tallying with the official answer keys.