Tamil Nadu Public Service Commission (TNPSC) has conducted Group-II A examination on 6th August 2017 to recruit the candidates for various posts. Aspirants who are looking for those kind of posts have appeared for the examination. Based up on the eligibility the admit cards are issued and huge number of candidates took the exam. The board will release the TNPSC Group 2A answer key 2017 shortly in their official website www.tnpsc.gov.in. 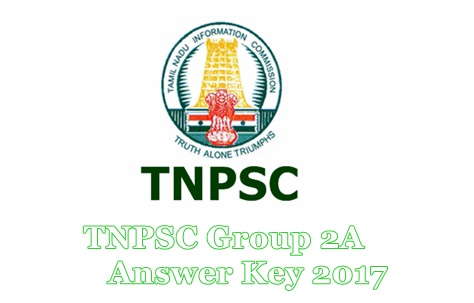 TNPSC Group 2A Answer Key 2017: Screening of the candidates for this examination initially is the written test, based upon the cut off mark set by the board the candidates will be filtered and the filtered candidates will have the chance to appear for the further rounds. The answer key for the TNPSC is not yet released but will be available soon in the official website of the board. Aspirants can check the answer key and they can have an idea about their results. The cut-off marks will also be available soon, the cut-marks will be prepared based up on the category. Meanwhile many institutes and the experts will prepare the answer key which is not official but aspirants can check that and have an idea even though that will not be the final as it will vary from the original answer key.

Name of the Exam: Group-II A

Tamil Nadu Public Service Commission (TNPSC) conducts Combined Civil Services Examination-II (Non-Interview Posts) (Group-II A Services). There is only a single paper for the test and the pattern of the test is objective type. The topics that are covered in the test are General Studies (Degree Standard) for 75 questions, Aptitude and Mental Ability Test (S.S.L.C. Std.) for 25 items questions, General Tamil/ General English (S.S.L.C. Std.) for 100 items questions. Total the examination is for 200 questions. Total Marks for Tamil Nadu Public Service Commission (TNPSC) Group II-A are 300 Marks (1.5 Mark for Each Question), the time Duration for the exam was 3 Hours (180 Minutes).

The TNPSC answer key 2017 for group 2a exam 2017 have now been uploaded here courtesy of NR IAS Academy and We Shine Academy.

Group 2A Answer Key 2017 By NR IAS Academy are given below. You can view or download the PDF by clicking on the subject papers and Official Keys will upload soon.