TS Board Exams (Inter, 10th class) and Common Entrance Test (Eamcet, Icet, Ecet, Pgcet, Pgecet, Ed.cet, lawcet, Pglcet) Important Dates. This Telangana Government will be conducting this Board Examinations as well as also Common Entrance Exams for admission into private and government colleges for various courses. The notification has released for the TS CET 2017 and AP Board Exams 2017 as well. These TS Board Examinations includes the TS Inter 1st year Exams 2017, TS SSC Exams 2017 and the TS CET’s also that includes EAMCET, LAWCET, ICET, PECET, ECET etc. TS Common Entrance Test Exam Dates 2017 notification was released on 22nd December 2017. All the students can view the dates and start preparation according to given dates. These dates are very important to the candidates to know the details about the examinations. 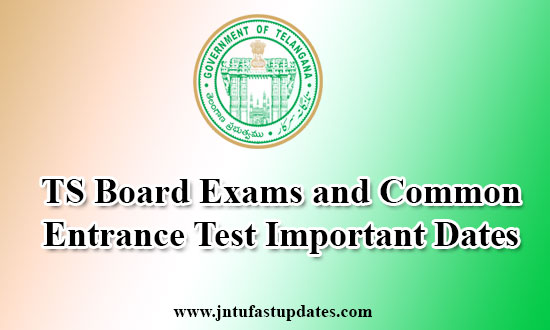 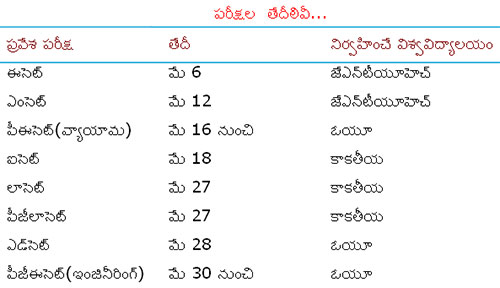 All this Entrance examination will be conducted in Telangana State only. All the further details will be given later like Online Application, Examination Fee and Syllabus as well. Students must work hard for the examinations as they the dates are very near.

10th Class Exams (SSC) 2017 : Directorate of Government Examinations is an independent department functioning under ministry of secondary education, Government of Telangana. The department is responsible for conducting the SSC/OSSC Public Examinations and a number of minor examinations.

TS SSC Exams 2017 is starts from 14th March and it is conducted by TS SSC Board.

TS ICET 2017 Exam : TS ICET Examination 2017 will be conducted on 18th May, 2017. This is integrated common entrance examination and the examination will be organized by Kakatiya University.