TSNPDCL Sub Engineer Results 2018, Merit List: Telangana State Northern Power Distribution Company Limited (TSNPDCL) has organized the Sub-Engineer (Electrical) written test on 8th July. This test was attempted by a large number of hopefuls seeking to get SE jobs in TSNPDCL. All the hopefuls applied for SE posts in TSPDCL have appeared for the test with a great ambition to get the job. Aspirants appeared for the examination have also analyzed their attempt by evaluating the score with the answer key released by the TSNPDCL. All the aspirants are keen to check the result as the competition is high for the announced posts. The TSNPDCL is shortly going to announce the result on its official website, tsnpdcl.cgg.gov.in. All the aspirants given the test can download the result and check the cutoff marks. Aspirants can check more details from the following article. 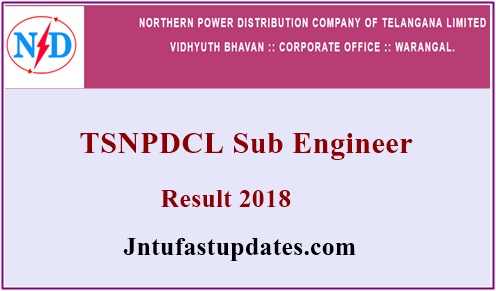 Telangana State Northern Power Distribution Company Limited is the state level organization working for Telangana power supply and other related works. The organization offers various jobs for the interested aspirants. This year the Telangana NPDCL has released the official notification for 497 Sub-Engineer / SE (Electrical) posts. The TSNPDCL has received a great number of applications from the interested and eligible aspirants. The application process for SE (electrical) posts was completed by 18th June. Many of the aspirants willing to get jobs in the state of Telangana have applied for the TSNPDCL Sub-Engineer jobs. Almost all the applicants have appeared for the test with great ambition. Candidates eager to check results can confirm the result date from the TSNPDCL official website. Approximately, the result is going to be released in 3-4 weeks after the examination date. Hence candidates can expect the result in 4th week of March (tentatively).

The Result will be accessible on the official website, tspdcl.cgg.gov.in. Candidates can download the Result and also can download the scorecard.  The Sub-Engineer Cutoff marks 2018 will also be announced by the authority. The cutoff marks will be announced based on various factors such as the number of posts, the number of people competing for the announced posts, and various others. Candidates clearing the examination with requisite cutoff marks are said to be qualified in the examination. The TSnPDCL will release the merit list of aspirants who can proceed to the next round of selection process.