UP Police Fireman & Jail Warder Admit Card 2020, Exam City Center Slips Download: Uttar Pradesh Police Recruitment and Promotion Board (UPPRPB) has recently accepted applications from a large number of interested and eligible aspirants for the posts of Jail Warder. The organization received lakhs of applications from the male and female aspirants having the suitable eligibility standards. As the selection will be done based on the written test, physical standards, and various other tests, aspirants must have to get ready to qualify in the selection process. The authority is going to conduct the Jail Warder & fireman exams for all applicants on 19th & 20th december 2020.

Hence the aspirants applied for UP Police Jail Warder Posts must prepare well to crack the examination as there is a tough competition. Aspirants must download UP Jail Warder admit card before going to the examination. The hall ticket/admit card is the most important document to be carried by the applicants. The competitors will be asked to show the admit cards at the time of verification. Hence download it from the UPPRPB official website, uppbpb.gov.in and take it to the examination without fail. More details regarding the admit card availability date, downloading process, and others have been specified in this article. 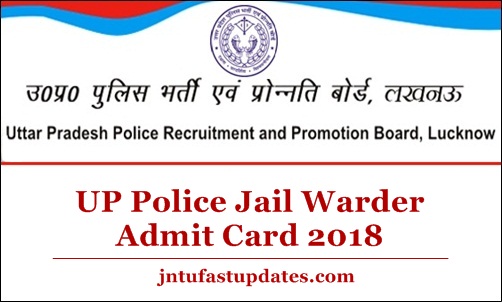 Uttar Pradesh Police Recruitment and Promotion Board, Lucknow is the government organization that works for the recruitment of manpower for the police department of UP state. This department releases various job notifications annually to hire the suitable aspirants into various designations. This year the UPPRPB announced 3638 Jail Warder for male and female candidates. The organization received a large number of applications from the eligible aspirants. The competition has raised for UP Jail Warder posts this year. The selection of suitable aspirants will be done through the written test, physical standards test, physical eligibility test, medical examination, and document verification rounds. Hopefuls qualifying all these rounds will be finally given the opportunity to works as a Jail Warder in Uttar Pradesh.

Aspirants competing for Jail Warder written test in the state of Uttar Pradesh can get their hall tickets from the UPPRPB Official portal, uppbpb.gov.in. The hall ticket is expected to be accessible before 10 days of the examination (approximately). Hence the aspirants must keep checking the official portal to download the hall ticket.

UP Police Jail Warder/Fireman Exam admit Cards are Released. Download from below link

What are the UP Police Jail warder Fireman Exam Dates?

Exams are conducting from 19th to 20th december.

How can we check My Exam city center Details?

Exam city center name and details are Released. Students can download file and check from above post link.

Where i can download UP Police Jail warder call letter?

people can visit official website uppbpb.gov.in or we will be mention direct link in our above post.