UP Police Jail Warder Result 2019: Uttar Pradesh Police Recruitment and Promotion Board (UPPRPB) organized the Jail Warder written test recently. Candidates aspiring to get jail warder posts in Uttar Pradesh have applied for the announced posts. As per the updates, all the hopefuls have appeared for UP Jail warder as per the schedule. The written test round has been organized in many examination centers across the state of UP. The organization released the jail warder answer sheet soon after the examination completed. Aspirants competed for UP Police Jail Warder examination can download and check the answer keys from UPPRPB Official website, uppbpb.gov.in. The answer key is available for all sets A, B, C, D. Competitors can analyze their attempt by comparing the answers with the attempted set. UP Police Department is going to announce the jail warder results soon. All the competitors can wait for the result date. Keep checking UPPRPB official portal, uppbpb.gov.in to download the result, cutoff marks, and merit list.

Uttar Pradesh Police Recruitment and Promotion Board, Lucknow is the government organization that works for the recruitment of manpower for the police department of UP state. This department releases various job notifications annually to hire suitable aspirants into various designations. This year the UPPRPB announced 3638 Jail Warder for male and female candidates. The organization received a large number of applications from the eligible aspirants. The competition has raised for UP Jail Warder posts this year. The selection of suitable aspirants will be done through the written test, physical standards test, physical eligibility test, medical examination, and document verification rounds. Hopefuls qualifying all these rounds will be finally given the opportunity to works as a Jail Warder in Uttar Pradesh. 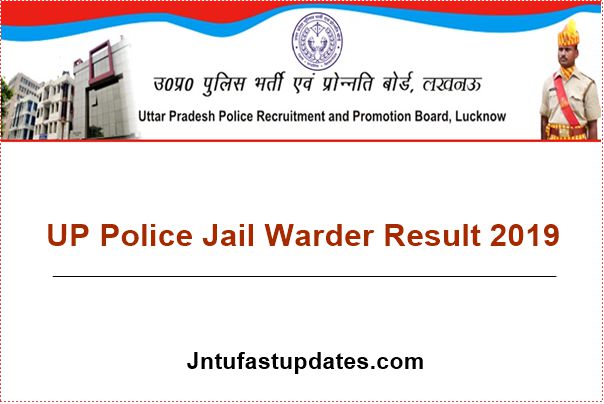 UPPRPB is going to announce the jail warder result date shortly. Candidates competed for the written test round can expect the result in September/October [tentatively]. UP Police Recruitment Board will announce the result date on its official website, uppbpb.gov.in. All the competitors who have come across the written test round can check the portal for further updates regarding the result, cutoff marks, and merit list.

The organization is going to declare UP Police Jail Warder merit list 2019 with the names of qualifying candidates. The candidate names specified in the merit list will be called for the Physical Efficiency Test (PET) round. Initially, the competitors require to clear the examination round with sufficient cutoff marks to get shortlisted for the PET, PMT, and interview rounds. UPPRPB Jail Warder merit list 2019 will be released along with results. Candidates competed for the written test round can keep checking UPPRPB official website to download the result.

Candidates have to get the qualifying marks/cutoff marks as specified by the UP Police Recruitment Board to clear the written test round. UP Police Jail Warder Cutoff marks Category-wise for General, BC, ST, ST, and other categories will be announced by the conducting authority. The cutoff marks/qualifying marks will be decided by various factors such as the level of competition, the number of posts announced, performance of the aspirants, the difficulty level of the examination, and various other factors. Candidates competed for the written test round can expect the declaration of cutoff marks along with the result. Candidates can check the UPPRPB Jail Warder qualifying marks 2019 [expected] from the following table.

Height: Minimum Standards for Heights are as follows

Chest: Chest for Male candidate is as follows

Weight: Weight for the female candidate is as follows